The most successful AVANTASIA tour ever with countless sold out shows around the globe is heading towards the end. If you wanna see some of the final GHOSTLIGHTS Shows you have to come to one of the final festivals AVANTASIA is going to headline. The last show in Germany will take place August 26th and will be a very special event: AVANTASIA will perform at the medieval abbey "Kloster Schiffenberg“ in Giessen in a breathtaking historical environment.

And last but not least: If you want to have a look at the tour life through the lense of Tobias himself, you can now follow him on and see and read what he has to say at

May 12, 2016
NEW VIDEO CLIP & SINGLE: "DRACONIAN LOVE"
On Friday the 13th the new single and video clip "Draconian Love" taken from the album "Ghostlights" will hit the stores. The single will be available as download, and the video clip can be watched here:

Tobias explains the choice of "Draconian Love" as the second single: "It was a logical next single, the song isn't really mainstream, yet it's extremely catchy." Also the fans helped in making the decision: "We've been touring for weeks and we've played the song every night. From Tokyo to New York people went crazy, so I think the decision was made by the fans as well. And as we wanted to include them in the clip, we decided to shoot the video while on tour, performing it prior to our show in Sao Paulo, Brazil two weeks ago.

"The GHOSTLIGHTS WORLD TOUR has started early March and leads AVANTASIA to 24 countries in Europe, Russia, Japan, USA, Canada, Mexico, Costa Rica and South America. So far 24 out of 33 shows were completely sold out in advance. In the summer AVANTASIA will play headlining performances at the following European festivals, until they finish the tour at the historical Open Air stage at the Schiffenberg abbey near Giessen, Germany on August 26th!

The new album "GHOSTLIGHTS" has entered the charts in 15 European countries as well as in the USA, Canada and Japan. It went into the Top10 album charts in 9 countries, in Germany "GHOSTLIGHTS" went in at #2.

May 01, 2016
SEE AVANTASIA AT THE SUMMER FESTIVALS 2016
The first leg of the world tour is over. 8 weeks, 3 continents, 33 shows, most of them sold out - and the madness will go on, the festival season is about to begin - AVANTASIA are confirmed to play headlining shows at the following festivals: 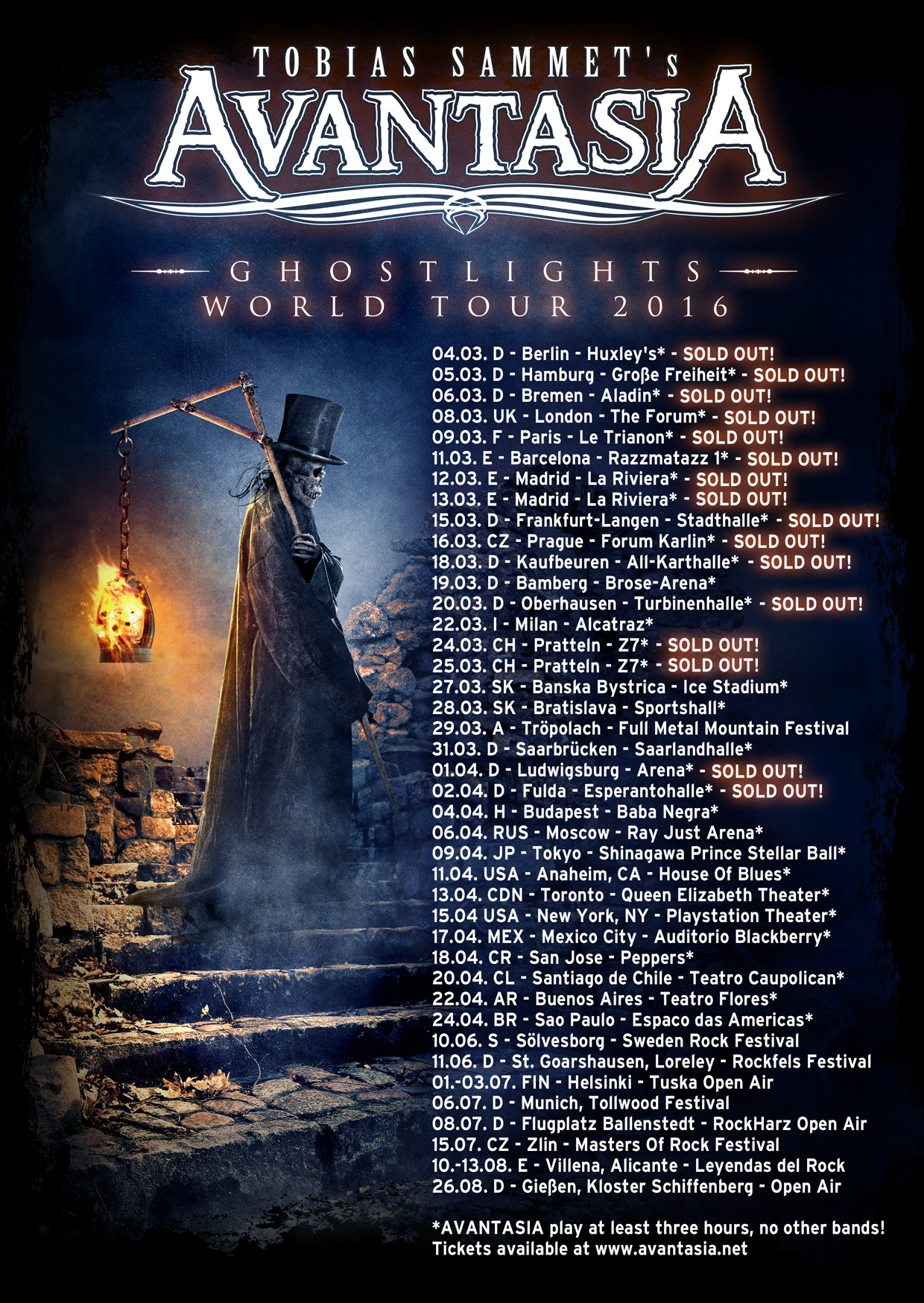